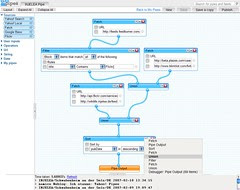 After suffering thr0ough continued issues with Yahoo Pipes and other infrastructure pieces used in Mediaor (loosely pronounced "meteor"), I finally "reassembled" the music/technology news and views mashup. I think the new set up will be much more reliable, plus it lets me update, add and filter news sources easily and quickly.

There are some more improvements that I still would like to make to the front-end (www.mediaor.com) and the twitter bot (@mediaor) but wanted to get the backend sorted out first.

As always, if there are any other blogs or news sites that you think would make a good addition just let me know.

Posted by jherskowitz at 7:28 AM

Thanks Jason.
This is literally my morning paper each day.

I saw a tweet by you about some Minolta lenses. Let me know if you still have them. I might be interested. E-mail me baldheretic at gmail dot com