Engadget's got some pictures and speculation on Microsoft's soon-to-be unveiled "Origami Project" (www.origamiproject.com). 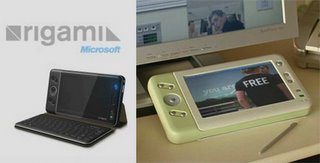 Potentially an OQO type of ultraportable device? Probably and instant-on Windows Mobile device with WiFi and portable media capability. It is obviously no coincidence that this "technology" announcement is coming a couple of days after Apple's. They must think that what they've got up their sleeve trumps Apple's rumored touch-screen 6G iPod Video.

As I've mentioned before, I think a "WiFipod" is extremely compelling (although I'm biased and would certainly prefer a PlaysForSure device that works with all the subscription music services). Shameless Plug: Check out AOL Music Now! Should be an interesting week....
Posted by jherskowitz at 9:10 AM